Blood of Kittens is on Sisters of Battle Overdrive... 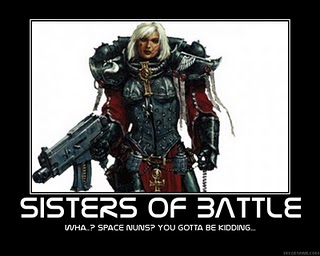 I'm actually really looking forward to what the  Sisters of Battle Codex. I am strongly considering building an army. But that largely will depend on the models and rules. I have always liked the fluff behind the army, it's just when you sat down with army builder and tried to work out a fun and effective list, it was either extremely boring   (repeated unit types) or extremely expensive (damn metal models).


1. So for me army HAS to be in plastic... if the basic battle sisters are metal still or even the new fine cast, I'm done.

2. There has to be SOMETHING different about Sisters, that something is/was "faith points and acts of faith"... before the rules were difficult to remember (is this one that you roll above model count or below). So cleaning that up will be an improvement.

Which brings me back to my title of the post... if you haven't checked out Blood of Kittens yet you really should. The guy was darn near spot on for the Grey Knight Codex.


I don’t know if the new sisters release will be resin or plastic or the numbers in the boxes, but like I said before my bet is on Finecast re-release. Now with that out-of-the-way on to new rules…
As always let us start with the easy ones that pretty much everyone figured was going to happen.
So let start with the big one and perhaps most controversial change to Sisters of Battle: Faith
I was amazed reading around the Net how quite a few people are pretty close to understanding how Faith is going to work. One caveat about the faith rules: I only have most of the story so let us hope someone else can pluck the rest from the aether. The only thing that really stays the same is only faith producing units can use faith. Gone is the over and under rules based on model count and gone is faith powers that everyone can use.  It is replaced with every unit has its own unit specific act of faith to call upon.

So for instance Repentia Act of Faith allows them to always land an attack even if they are killed before they can swing. They are little bonuses like re-rolling to wound and hit, no USRs. Now this if fine and dandy if you just pop a faith point and bam! power goes off, but not so fast. Acts of Faith require that you roll 5+ to activate . This makes faith much more unreliable… maybe. In addition every unit that can get faith generates 1d6 faith points per turn. This also means that a new faith pool is generated each turn with no storing of past faith. As well faith can be activated in multiple phases of the game, so for instance you can re-roll to hit in your shooting phase or in your assault phase. What is not clear is a few things. Like how many dice can you throw at a single act of faith? How many times can you attempt to activated a power? If you get an act of faith to go off in one phase does it carry over to the next phase? If you fail an act of faith does that mean you cannot try again in another phase? I don’t have the answers, but what do you think?
Random tidbits
Specifics
Sisters have about 5 HQ choices including Special Characters
St. Celestine: Same price as a Grand Master you get 2+/+4 saves, WS/BS 7 Jump Pack, Fleet, Power Weapons always wounds on 4+   Has the power to come back like GK Thawn if killed.
Confessor: Takes the slot of the old Inquisitors. Cheap HQ (Warboss). Can create a henchman band using most of the henchman found in the GK codex. What makes the Confessor extra deadly is the ability for it to re-roll hits and wounds for her and the squad. This is the translation of the rumor matrix. So think for one second about her and the Death Cult together?
Repentia: Cheaper close to SM cost. FNP, Rage, Fearless, 6+ invul, no transports
Battle Sister Squad: Cheaper 10-20 unit size (no combat squads), but has access to Immolators which begs the question… Immolators either get increased transport capacity or Sisters break the rules concerning model count and buying transports. Multiple acts of faith.
Exocists: Pretty much same as before.
What is not in the Codex
The Units (more information than others)
Canoness: Here is my special shout out to the Canoness: you are terrible. I mean grossly underpowered. Now this is going to sound like a cop-op, but I am not going into details because my hope is that she will be changed before release. It just sounds and looks like she is an unfinished product. She gets her own retinue that cannot do anything; she starts out cheap, but her upgrades are expensive and lame when you compare to everything else. So here is hoping to GW getting her fixed.
Repentia: Forgot to mention they have fleet
Celastians: Cheaper than a Marine, but not really anything going for them (that I know of)… extra attack. Re-roll hits for act of faith
Sister Battle Squad: Can still get a Heavy Flamer
Shraphim: They are pretty amazing. Cheaper than a Space Marine you get a Jump Packing, Hit and Running, and an act of faith that has them re-rolling wounds. You can also upgrade them to run with double hand flamers and melta pistols. They act both as an extra close combat weapon and become assault 2 instead of being twin-linked. So that means Assault 2 melta weapons.
Dominion Squads: Still get 4 special weapons. Act of Faith twin-linked.
Retributor Squads: Pretty fantastic. CHEAP! Talking under Long Fang cheap to fully kit out. Expect the return of the Heavy Bolter with these. Act of Faith is Rending.
Penitent Engines: Again fantastic. Same statline (Walker). No Scout or Infiltrate. Cheaper and can be a squadron aka 9 Engines. They still get the 1D6 attacks, but any wounds generate additional attacks (don’t know if they work like Blood Talons). 6+ Invul (don’t know if they generate faith)

Email ThisBlogThis!Share to TwitterShare to FacebookShare to Pinterest
Labels: Sisters of Battle