GREY Knights vs the World (a rebuttal to Hero @ BoLS) 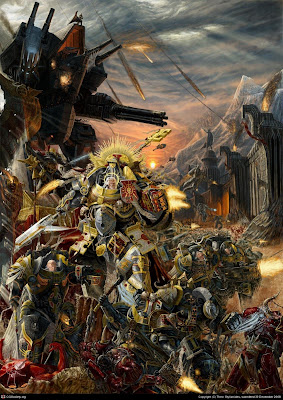 As we all known the Grey Knights are just around the corner and I for one am getting pretty pumped up for this release. As I played my Knights for a good 3 or 4 years on the tournement scene, but decided to go with my marines for a little better sucess rate. However, its not because I wasn't having sucess, I was quite good with my knights and rarely was I ever out of a game. I had some bad luck at adepticon gladiator one year, but I totally overcame that the next year I played. I have a feeling that the Grey Knights will be far better than anyone thinks, maybe not so much in the hands of those who will just start knights, but for me and those who already have played them for years.

Playing the third edition codex for as long as I did with deamonhunters gave me a real advantage when I switched over to marines and Wolves. What advantage is this you ask? Well the learned ability of getting my units into the position where they could do the most damage and take the least amount of return fire possible. This really is an art and you will find that most experienced gamers win and lose their games in the movement phase. You don't have to be fast to manuever, but that another article.

Back to the knights and how they will fare against the other armies out there...

Vs. Marines
It's a toss up here. I think our friend Hero really didn't take into account the fact that we now have scoring terminators. Yes plasma hurts, but against paladins, whom are kitted out for wound allocation, plasma is going to be a minor henderance. Plus powers like shrouding are going to be a nice little pick me up against things like plasma cannons. Because rarely are plasma cannons going to have a clean shot and the ability to get a 3+ cover save is huge.

So what about the space marine librarian or a sw rune priest shutting down my powers every turn? remember that Grey knights are not the only things at our dispossal. One of the best weapons in our arsenal is the vindicare assassin. I've never had problems with an enemy character when fielding this guy. Typically if they know there is one of these guys floating around, that librarian will stay far enough away to be a none factor. Then in that case I'll take Grey Knights over marines any day.

Vs. Chaos Deamons
Ok I have to totally agree here, deamons beware the Grey Knights are coming and this time we mean business. From Psycannons to preferred enemy its going to be rough going.

Vs. Chaos Marines
Edge Grey Knighs. Again, there are more than just grey knights in this codex. I for one don't fear lash at all. Why? Because my units 9 times out 10 will either be out of range of it or in transports. Also with a little imagination in list making lascannons won't even bother my troop choice of Paladins. The forces of chaos are going to have to win this fight at 24 inches and that's where grey knights are nice and comfortable. Hard fought but my edge is to the knights.

Vs. Dark Eldar
Edge goes to the grey knights. The key to DE is their speed and the problem for them here is that every transport they have can be shot down by basic grey knight weaponry. I'm not even going into the heavier weapons, plus most of their units dont even have a save vs storm bolters. DE are good don't get me wrong but after their update they have become an elitist army. No more warrior swarms and a little more expensive in the transports really cuts into their numbers. With the old dex DE were more of a threat but I don't see it as being as hard this time around. Sure they have poison shooting but you have to be in rapid fire range to make it truely effective. Getting there will be the hard part.

Vs. Eldar
Toss up for sure. Knights can be just as fast with the storm raven and more durable with the land raiders. Banshees are going to be a tough unit to beat unless you are using paladins that are kitted out so you can allocate those wounds around. With the psy defense eldar has it makes things rough on the knights, but we have an ace in the whole with the vindicare again. One shot is all he needs and boom no invuln on that farseer named eldrad. Be honest what eldar player doesn't use him? And they say marine players use vulkan too much.. Pshhh... But both are elite, both are fast and both bring considerable fire power. And for those who say fire dragons trump paldins, you're wrong, they are only S6 guns.

Vs Imperial Guard
I've gotta give this one to the guard. They can if they choose just bring to many guns. Rending or not the knights can simply not match the armor that can be brought. You can try with 3 land Raiders, but the points just add up to quickly. Guard can bring two russ for every land raider, well close to it anyway. You have to be shrued as a knights player and really focus on one spot in the army and then pray you can break through without getting all shot up.

Vs. Necrons
Not even a question here necrons will get punked with out much of a fight. This isn't worth a third sentence.

Vs. Orks
Toss up here, Orks can bring so many boys with shootas that the knights are going to end up being out shot. Knight player are going to have to rely on multi assaults and doing mass amounts of wounds with the various psy powers. However, it might be fun to drop Brother Captain Stern right in the middle of a horde and let his powers do the work. But what it will come down to is psy powers vs numbers and its a hard one to call.

Vs. Tyranids
Edge Grey Knights. Why? Two words, Paladin Terminators. As if normal terminator didn't chew them up enough already, Paladins will just never die and walk right through anything in their way. Shadow in the Warp or not.

Vs. Witch Hunters
Close one to call here, but I'm going with the Knights. Sisters are amazing at 12 inches without a doubt, but having 2 wound terminators at 12 inches is better. A little tinkering with the kit and not enough wounds will be done to them, thus allowing the terminators to walk through the squad. Storm Ravens just edge out imolators and land raiders are just nice to have. In the end it comes down to effective ranges and grey knights have the edge here.

To wrap things up you have to remember that Grey Knights will not just be run with the 3+ armor save guys and they have little perks with assassins to help clean things up. Grey Knights as a whole from what I know are going to work real nice but be very elite. Which for me won't be a big change, cause you all know I run thunderwolves and expensive HQs. So not a bad transition back and not much of a change from what I ran before.
Posted by Senger at 12:12 PM